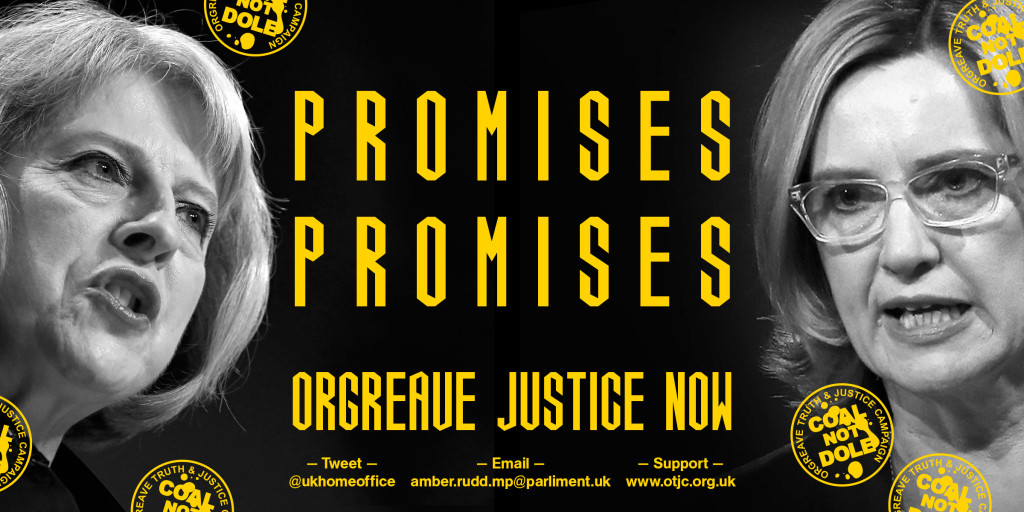 From 9.00am on Friday 29 July, and for seven days afterwards two giant screens on the sides of the Sheffield Parkway are transmitting a powerful message to the tens of thousands of passing drivers.

For fifteen seconds every minute up to midnight drivers will see the striking statement, designed by Manchester-based Craig Oldham, and the son of one of the miners arrested and charged at Orgreave.  It has the pictures of Prime Minister Theresa May and Home Secretary Amber Rudd on either side of the screen with the text ‘Promises, Promises: Orgreave Justice Now’.At the bottom of the screen are Tweet @ukhomeoffice and email amber.ruddmp@parliament.uk

This unusual but dramatic initiative was made possible through two sponsors, Dorothy and Alan Hides, who approached the Orgreave Truth and Justice Campaign (OTJC) on 18 June this year to offer their support.  They were at the big rally held at Orgreave to renew the call for a public inquiry and to remember the infamous events which took place there thirty two years ago.

OTJC Secretary Barbara Jackson said, ’We’re extremely grateful for their support for this initiative, which is a first for us. We have been great at getting our message out to the media and on social media but to have our campaign so prominently displayed on the Sheffield Parkway, and so close to where the grim events at Orgreave took place during the miners’ strike, is tremendous.’

She added, ‘This initiative takes place against the background of our frustration with the lack of a decision from the former Home Secretary over a public inquiry into policing at Orgreave during the strike. We now have a meeting with the new Home Secretary planned for September but we urge the public to contact here to express their support for a public inquiry.’