The Orgreave Truth and Justice Campaign (OTJC) is holding a rally at Orgreave on 18 June, the 31st anniversary of the Battle of Orgreave that took place during the year long miners’ strike in 1984-85.

Recollections of 18 June 1984 will be combined with an update on the struggle by the OTJC for a public inquiry.

95 miners were arrested at Orgreave after thousands of police officers – many in riot gear, with others on horseback – brutally assaulted miners participating in a strike aimed at defending jobs and mining communities. However when the subsequent court cases took place all of the charges – which included, in many cases, riot – were abandoned when it became clear that the police’s oral and written evidence was unreliable. Each prosecution had been supported by two police officers making near-identical statements. Later, South Yorkshire Police (SYP) paid out £425,000 in compensation to 39 pickets in out of court settlements. Nevertheless, no police officers were disciplined for misconduct or charged for the injuries they caused to those they attacked.

It was in November 2012 that SYP – already under pressure following the release of the report by the Hillsborough Independent Panel that has led to fresh inquests into the death of 96 Liverpool fans – referred itself to the Independent Police Complaints Commission (IPCC) to decide whether there should be a full investigation into what happened at Orgreave on 18 June and in the earlier picketing at the plant in May/June 1984.

The IPCC has had over 2.5 years to conduct an investigation exercise. Earlier this year the OTJC was informed that the police watchdog’s report was now completed and could be examined BUT only if the OTJC agreed to be bound by strict terms of confidentiality. OTJC refused the IPCC’s offer and has stated the conditions are “effectively a gagging order where a small number of our members would obtain information they cannot discuss with other members and more widely with the many other people who support our work.

OTJC strongly condemns this situation and reiterates its demand for a full public inquiry into police actions at Orgreave in June 1984.”

The rally at the Old Bridge, Top End, just off Handsworth Road, S13 9NA will commence at 5.30pm on Thursday 18 June. 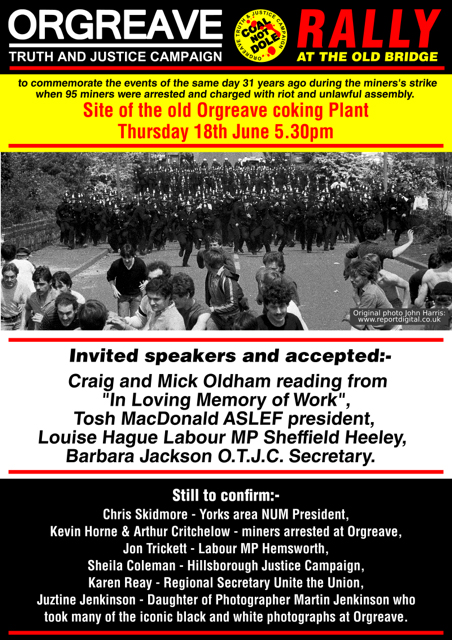 We’re Not Going Back