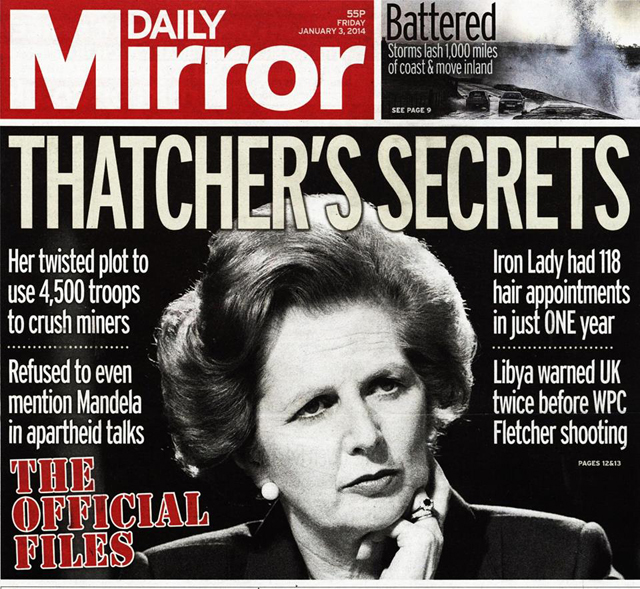 The Thatcher Foundation is attempting to rewrite the history of her role in the 1984-85 miners’ strike and is seeking to refute evidence implicating the former Prime Minister in covering up the true extent of the planned pit closures.To support its case, the Foundation has challenged the accuracy of my analysis of her 1984 cabinet papers that was broadcast by the BBC and published by the Campaign for Press and Broadcasting Freedom.
I believed the most important document released by the National Archives in January 2014 was a secret Downing Street document, dated 15 September 1983, which stated that Ian MacGregor “had it in mind over the three years 1983-85 that a further 75 pits would be closed”.

To me this was evidence that Margaret Thatcher misled the country throughout the strike when she and her ministers insisted time and again that MacGregor and the government had only ever considered closing 20 pits.

But the Thatcher Foundation (www.margaretthatcher.org) says the document “established nothing of the kind”: MacGregor did not have a secret hit list of pits for closure and the Prime Minister had not given her approval.

In its analysis of the 1984 cabinet papers, the Foundation has challenged not only my findings but also the conclusions of many other observers, including Labour MPs and the National Union of Mineworkers; they agree with my conclusion that MacGregor’s secret advice in September 1983 that he “had it in mind” to close 75 pits was a highly accurate indication of the restructuring he intended to carry out as chairman of the National Coal Board.

The Foundation’s rebuttal, by its editor Chris Collins, makes no attempt to justify the accuracy of the Coal Board’s much-repeated figure of only 20 pit closures, but seeks instead to demolish my conclusions:
“The number 75 has been quoted widely as established fact, often with the implication that the government ‘had a secret plan to destroy the British coal industry’, in the words of Nick Jones, a former BBC industrial correspondent during the coal strike who helped its current teams review the new documents. He went on to write his own account of them, which told of a ‘cover-up’ and a ‘secret hit list’, and assured us that Arthur Scargill had been ‘proved correct’.

“If this account is correct, many of the documents released from the secret files must be deliberate falsifications. There must have been a vast, pre-planned exercise to distort the record and deceive posterity, all revealed by a single document – the survival of which itself becomes exceedingly hard to explain, unaccountably overlooked by the falsifiers of so much else.”

The Foundation’s flippancy in seeking to ridicule my commentary is all the more misplaced when it has no alternative but to acknowledge the accuracy of a later document dated 19 January 1984 in which MacGregor stated that “he had concluded that the process of run-down ought to be accelerated. This would imply the loss of 45,000 miners over the next two years.”

Omitted from the Foundation’s rebuttal is the next sentence of the Downing Street document: “Summing up, the Prime Minister said that the objective of a more accelerated run-down of coal capacity was accepted.”
Here was proof if proof was needed that the government went into the strike in March 1984 having approved the equivalent of a minimum of 45 pit closures – more than twice the number owned up to publicly by the NCB, Mrs Thatcher and her cabinet colleagues.

Again the Foundation, while seeking to dismiss my finding of a cover-up, makes no mention of the lengths to which Mrs Thatcher went to convince the country that only 20 pits would close.
Another document also not mentioned by the Foundation, dated 22 June, 1984, refers to the Prime Minister’s redrafting and subsequent personal approval of a letter in MacGregor’s name that was sent out to all mineworkers. It said:

“Our proposals mean cutting some of the uneconomic pits and looking for about 20,000 voluntary redundancies… At great financial cost, miners have supported the strike for 14 weeks because your leaders have told you this:

“That the coal board is out to butcher the coal industry; that we plan to do away with 70,000 jobs; that we plan to close down around 86 pits, leaving only 100 working collieries. If these things were true I would not blame miners for getting angry or for being deeply worried. But these things are absolutely untrue. I state categorically and solemnly. You have been deliberately misled.”

Again the cabinet papers speak for themselves: Mrs Thatcher’s authority as Prime Minister was on the line during the pit dispute and here she is approving MacGregor’s claim that he is “categorically and solemnly” telling the truth in declaring that he had never mentioned as many as 70,000 redundancies and that only 20,000 were needed, when again the record showed that the government went into the strike already having approved 45,000 redundancies and had agreed to fund further redundancies as part of an accelerated closure programme.

The Foundation makes great play of my failure to be able to point to a document indicating government specific support for MacGregor’s 75 pit figure.

The absence of a paper trail is hardly surprising given the fact that the cabinet papers indicate that Mrs Thatcher was advised that when considering MacGregor’s plans for “accelerated pit closures” the best way to proceed was by “a short oral briefing…in the absence of written material”.

Nicholas Jones will be offering his analysis of Mrs Thatcher’s 1985-86 cabinet papers which are to be released by the National Archives on 30 December 2014 and which deal with the Prime Minister’s role in the final four months of the year-long pit strike.