Barnsley Trades Council, in conjunction with the Civic Gallery, is proud to announce the Barnsley launch of the award-winning book, “In Loving Memory of Work” written and curated by Barnsley born designer Craig Oldham. The book is a visual record of the 1984-85 miners’ strike, gathering together a vast range of visual artefacts from the strike including pictures of badges, cartoons, postcards and photographs. The book has a foreword written by film-maker Ken Loach.

The book has already had launches in Manchester (where Craig now lives) and London earlier this year. The Barnsley launch will be in the Civic Gallery, Hanson Street from 5pm (to 7.30pm) on Thursday June 4th. There will be display boards showcasing much of the work contained in the book. “In Loving Memory of Work” will be on sale during the evening. All profits from the book go to the Orgreave Truth and Justice Campaign.

The backdrop for this pop-up exhibition drawn from “In Loving Memory of Work” will be the V. And A. Museum touring exhibition “A World To Win” currently on show in the Civic Gallery. This is an exhibition of protest and revolutionary posters.

Two Barnsley artists, Paul Morton and Alan Hardman, are highlighted in the book, and in the Barnsley launch. Paul Morton produced a series of ‘Support the Miners’ postcards for Leeds Postcards during the strike. Paul has a long history of producing politically committed graphic design. The profits went to the miners’ Hardship Fund and raised over £20,000. Alan Hardman created a series of scathing political cartoons for “The Militant” newspaper during the strike. Both artists will be showing their work in the exhibition.

All three artists will speak about the significance of the miners’ strike to them and about the artwork produced during the strike. The discussion will be chaired by Dave Gibson, chair of Barnsley Trades Council.

Since its publication earlier this year the book has achieved significant critical acclaim. It has won two awards in the D and AD [Design and Art Direction] annual awards (www.dandad.org ) which have international credibility. One award is given for the unique cover of the book – produced out of coal-dust gathered from the Barnsley Main muckstack!

Craig Oldham was born days after the miners’ strike ended. Both his father and grandfather were striking miners. His father Mick was arrested at Orgreave and the picture of his arrest appears in “In Loving Memory of Work”. Part of the book’s power comes from the fact that Craig has such a personal family connection to the strike and his support for the miners is strongly evident.

Craig studied at Holgate School and Barnsley College before going to Falmouth University. He studied Graphic Design A Level as one of his A Level choices at Barnsley College and continued with that subject at Falmouth. He now has his own Design company based in Manchester and is a frequent guest lecturer to university Graphics students.

Craig explained what inspired him to produce the book: “I was brought up with stories about the strike. The hardship endured and the humour generated were formative influences in my life. Before the 30th anniversary of the strike I had a conversation with David Sinclair from the Civic gallery which inspired me to start collecting material for the book. The more I collected the more I realised how the visual material of the strike – apart from photographs – has been largely ignored.

“I hope my book can help get across the significance of the strike to a younger generation. And I hope people will appreciate the enormous creativity the strike unleashed.

“For me, producing the book was an intensely personal experience. But it’s not just my family story – thousands of families have the same story around the country. I hope the book gives my mum, my dad and my grandad, a platform to explain the importance of the strike to them.”

Trades Council secretary, Brian Steele, said, “We are very pleased to be working with the Civic gallery to give “In Loving Memory of Work” a Barnsley launch. This event follows on from our screening of “Still The Enemy Within” which was a great success. We urge everyone who is interested in the strike to come to this book launch.”

Trades Council chair, Dave Gibson, said, “The Civic’s ‘A World to Win’ poster exhibition is a perfect setting for Craig’s inspirational visual material from the miners’ strike. The two exhibitions together – and the discussion with the three Barnsley artists – will be a celebration of Barnsley’s creative talents. ‘In Loving Memory of Work’ is an amazing book which deserves to be widely known in Barnsley.” 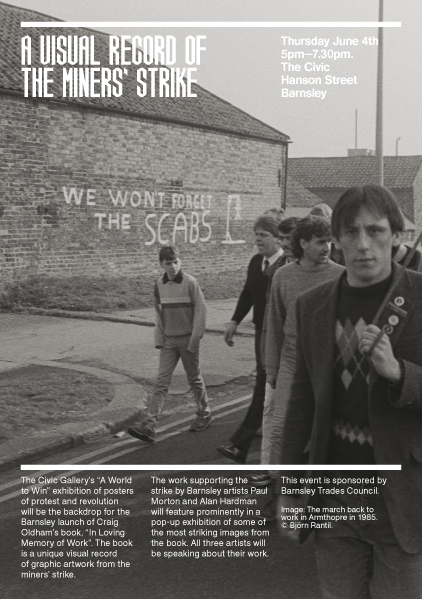 In Loving Memory Of Work: A Visual Record of the UK Miners’ Strike 1984-85

The Ridley Report – How the Tories prepared to defeat the Miners