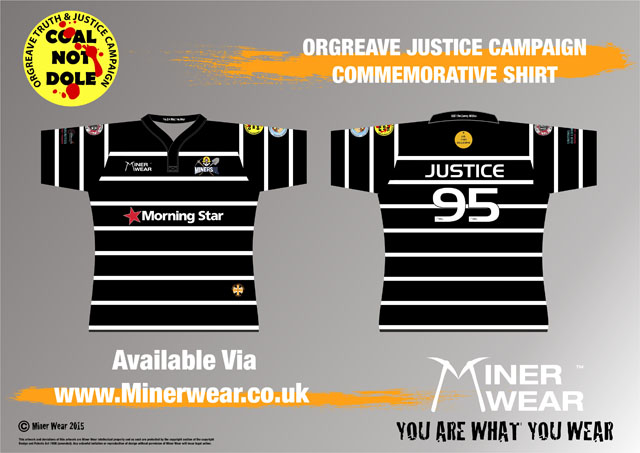 In 2012 The Miners Rugby League Football Club was formed at Ashington, Northumberland and broke new ground by playing in the North East Regional League and so became the most Northerly Club in England.

The Club paid homage to the Regions rich mining heritage of Northumberland the shirts depicted the names of the 70 Collieries incorporated into The National Coal Board on Vesting Day 1947. Sadly as we know there are no Northumberland collieries left today?

The shirt also paid reference to the miners who gave up their lives to the mining industry which was poignant in the year of the 150th anniversary of the New Hartley Pit Disaster.

The Shirts were based on Featherstone Rovers traditional design of Navy Blue and White hoops chosen because the Yorkshire Club was from the true heartlands of the mining communities. Once again the Colliers and Miners were linked by the common bonds of Rugby League and Coal Mining.

In 2014 the Club marked the anniversary of the Miners strike of 1984 by changing the initial design to incorporate the names of 85 Collieries that were closed in Durham, Northumberland and Yorkshire since the end of the strike and the devastation caused to the mine working communities. Orgreave was poignantly added to reflect the sacrifices made by the miners to protect their communities.

The shirt had the logos of The National Union of Mineworkers and The Orgreave Truth and Justice Campaign alongside Woodhorn and Straw Johnny who had given support to the Miners Rugby League team.

What was to become apparent was the continued struggle by members of The Orgreave Truth and Justice Campaign to clear the names of the miners arrested on the picket lines at the coking plant. To support the campaign Miner Wear is to produce a shirt to help raise funds for the continued campaign for Justice.

The shirt will be in black and white to represent the seams of coal and the names of the miners seeking to overturn their sentences will be incorporated in the white hoops of the design. As well as the Coal not Dole logo Graham Murdie the designer has collected together the logos of the NUM, Unite the Union and The Morning Star who have all showed continued support for the mineworkers struggle.

Hopefully attention will be drawn to the campaigns to save the last three remaining deep mines at Kellingley, Thoresby and Hatfield that will see the end of coalmining in this country. The legacy of Thatcherism still remains inherent in the Government of today.

The shirts will be available to pre-order on the 11th February 2015. Customers are advised to allow 3-4 weeks for delivery after payment is received. These will be available via our website http://www.minerwear.co.uk/ we accept
Paypal via the website or customers who wish to pay by bank transfer or postal order are advised to email us before placing an order so we can arrange this.

Shirts are priced at £50.00 +5.95 delivery (Delivery cost may increase when ordering more than one shirt).

Letter to Theresa May